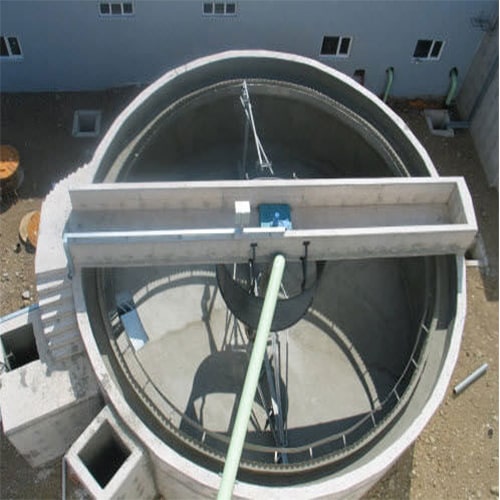 Clarification is the process of separating solids from the liquid. The principle of clarifiers is to create flocs from the suspended material in the wastewater by using chemicals and let these flocs settle by gravity in calculated retention time. The selection of a tank configuration and collector mechanism as scraper type and/or suction type depends upon the characteristics of solids suspension of the process liquid. Dutco supplies complete range settlement sewage tank scrapers in rotating and traveling types.
Clarifiers are settling tanks that are built with mechanical means for continuous removal of solids being deposited by sedimentation. A clarifier is generally used to remove solid particulates or suspended solids from liquid for clarification and thickening. Concentrated impurities, discharged from the bottom of the tanks are known as sludge, while the particles floating to the surface of the liquid are known as scum.
Although sedimentation may occur in tanks of other shapes, removal of accumulated solids is the easiest with conveyor belts in rectangular tanks or with scrapers rotating around the central axis of circular tanks. Mechanical solids removal devices, move as slowly as practical to minimize resuspension of settled solids. Tanks are sized to give water optimal residence time within the tank. Economy favors using small tanks; but if flow rate through the tank is too high, most particles will not have sufficient time to settle, and will be carried with the treated water. Considerable attention is focused on reducing water inlet and outlet velocities to minimize turbulence and promote effective settling throughout available tank volume. Baffles are used to prevent fluid velocities at the tank entrance from extending into the tank, and overflow weirs are used to uniformly distribute flow from liquid leaving the tank over a wide area of the surface to minimize resuspension of settling particles.
Sedimentation tanks have been used to treat wastewater for a very long time. The primary treatment of sewage is the removal of floating and settleable solids through sedimentation. Primary clarifiers reduce the content of suspended solids and pollutants embedded in those suspended solids. Because of the large amount of reagent necessary to treat domestic wastewater, preliminary chemical coagulation and flocculation are generally not used, remaining suspended solids being reduced by the following stages of the system. However, coagulation and flocculation can be used for building a compact treatment plant or for further polishing of the treated water. Sedimentation tanks called secondary clarifiers to remove flocs of biological growth created in some methods of secondary treatment including activated sludge, trickling filters and rotating biological contactors. 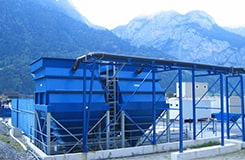