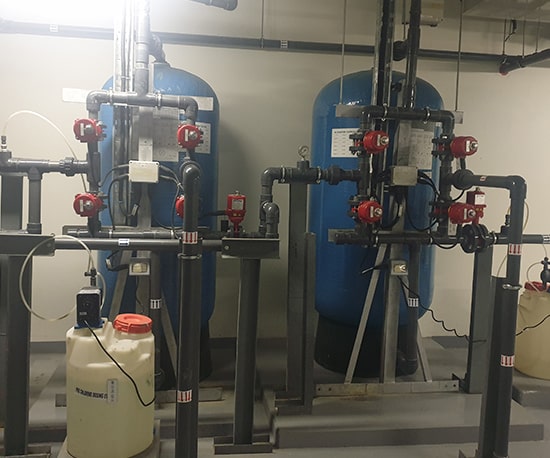 For reducing the level of suspended solids in process water, a multimedia filter is used. Small particles like clay, silt, grit, larvae, organic matter, algae, zooplankton, and other microorganisms can comprise suspended solids. For a multi-media filter, the filtration degree depends mainly on the filter media and flow )velocity through the filter. Conventionally, a multimedia filter comprises three layers of filling which are gravel, anthracite, and sand. The courser dirt particles are trapped by anthracite for preventing the formation of a layer cake on top of the filter bed. In the sand layer, the smaller particles get trapped. Particles will adhere to the sand with a low fluid velocity and with a cohesive bonding. The water is allowed to flow evenly by the gravel to the mushroom diffusers and out of the filter media.

The entire filter bed is allowed to function longer between backwash. Particles down to 15-20 microns are removed by a well-operated filter. Particles can be filtered down to 5-10 microns with the use of a coagulant addition. Over the period of time, the pressure drop over the filter rises while the flow remains the same because of the adhered suspended solids. The filter media eventually needs to be cleaned by a process known as backwashing. When the differential pressure exceeds 0.1 to 0.2 bar over the differential pressure of a clean filter, a backwash should be performed. At least once a week, a backwash should be performed for preventing clumping of the media. The flow direction over the filtered reverse with a setup of valves. Depending on the type of the media, at a velocity of 35m/h, the filter bed expands. Due to the raised velocity, the particle detaches. The expanded gap between the grains makes sure that it can exit the vessel. When the velocity exceeds the maximum design specifications the filter bed expands too much which will result in losing media from the top during backwash. The filtered water of another filter or raw water that normally enters the filter at the top works as the source for backwashing the filter. A small amount of raw water entering the system downstream with the use of raw water should be taken into account.