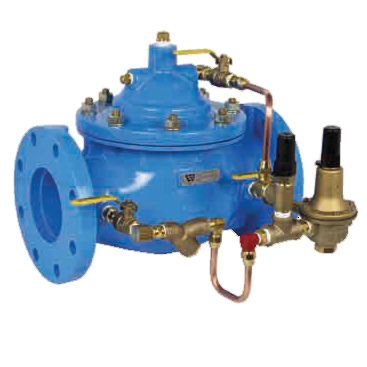 A compactly designed steam system produces clean dry steam in the boiler house that is ready for delivering high pressure through the distribution network. The potential for generating and supplying high-quality saturated steam at the lowest overall cost gets maximized by this. The needs are different at the point of use, however. Low steam can offer a wide range of advantages here as the design of the equipment and its construction can because of lower pressure rating cost less to buy, as the flash steam loss is reduced can cost less to operate, suffer fewer scaling problems due to lower steam temperature.

The throttles position of the primary pilot-operated ductile iron valve gets controlled with the help of an adjustable pilot which operated with connection with an orifice. The downstream pressure is sensed by the pilot valve and this immediately reacts as the outlet pressure gets decreased or increased with the variations of the demand. The pilot can sense the pressure of the outlet and then immediately reacts to removing or adding from the top of the diaphragm of the main valve assembly which allows the valve to throttle and reposition as the pressure on the outlet tends for increasing or decreasing with the flow demand variations. The diaphragm of the pilot will sense the changes in the flow of the system automatically while it controls the primary valve constantly for opening, throttling or closing to maintain the preset, desired reduced pressure on the outlet. The required downstream pressure is offered by the throttling action of the main valve. The pilot-operated regulators are having the same important components of the direct-operated variants with the addition of a pilot that can separate the loading force of the diaphragm from the P2. This can help for controlling the force of the diaphragm with connections to the changes in P2.

From Dutco Tennant LLC get the most advanced range of Pilot Operated Pressure Reducing Valves for all your plumbing projects. We are the most trusted ductile iron valve supplier in the region with more than 40 years of experience.