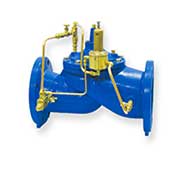 Pressure relief valves work as major emission control devices. The pilot- operated pressure relief valves are mainly used on tanks for liquid storage and other systems or process vessels for preventing structural damage because of excess internal pressure or vacuum. The self-contained system known as the pilot-operated valve does not require any external power or pressure source. Using the system media and pressure, the pilot valve automatically controls the pressure of the actuator to either open or close the main valve depending on the pressure setting of the pilot against the system pressures actually.

Just above the inlet flange, the system media and pressure are sensed at the pickup fitting. The pickup point is directly on the vessel and usually close to the valve inlet in the case of remote sensing. After that, the pressure and media are streamlined to the pilot inlet and are redistributed to the sensing chamber and to the actuator. The same pressure acts downwards against the actuator and upwards against the seat pallet, under normal system operating conditions. The net force is downward which will press the pallet against the seat as the actuator has a larger area than the seat pallet and it thus keeps the main valve closed. There is no bleed to the atmosphere while the pilot and main valve are closed. Because of an overpressure condition, when the system pressure rises to the pilot setpoint, the upward force in the pilot sense chamber will overcome the downward spring force for lifting the pilot stem. When the stem gets lifted, the pilot seat gets opened by it for allowing flow through the pilot and out to the atmosphere in applications where nothing is permitted to discharge directly into the atmosphere, for channeling to a collection header the pilot discharge may be plumbed to the main valve outlet. A pressure drop downstream of the orifice will get caused by the flow through the pilot and adjustable orifice which in turn will cause the pressure in the actuator to drop. The main valve will open when the actuator pressure decreases to a point where the upward force on the seat pallet is greater than the downward force of the actuator. The main valve opens on the amount which depends on the system overpressure. As high as the overpressure is, the main open the wider until it reaches a fully open position at around 10% overpressure. After relieving excess pressures and the system pressure is below the set point of the pilot, the valve returns to its normal closed position.

The pressure relief valve in which the disc is held closed by the pressure of the system and the holding pressure gets controlled with the help of a pilot valve which is actuated by the pressure of the system. The pilot-operated ductile iron valve is mostly used for emergency relief in cases of overpressure events. The difference between the traditional variant with the Pressure Operated Reducing Valves is that the pilot valves utilize the pressure of the system for sealing the valve. A conventional valve mostly uses a spring for holding tie piston or disc on the seat. The important parts of the valve are the pilot valve, a pilot tube, a primary valve, a piston or disc, a seat and the dome. The volume over the piston is known as the dome. The pressure operated variants are also known as pilot-operated safety valves, pilot operated safety relief valve or pilot operated pressure relief valve which mostly depends on the application and the manufacturer. The most generic term is POPRV. Dutco Tennant LLC can get you the finest range of pilot-operated ductile iron Pressure relief valves in the Middle East, from the biggest names in the industry.